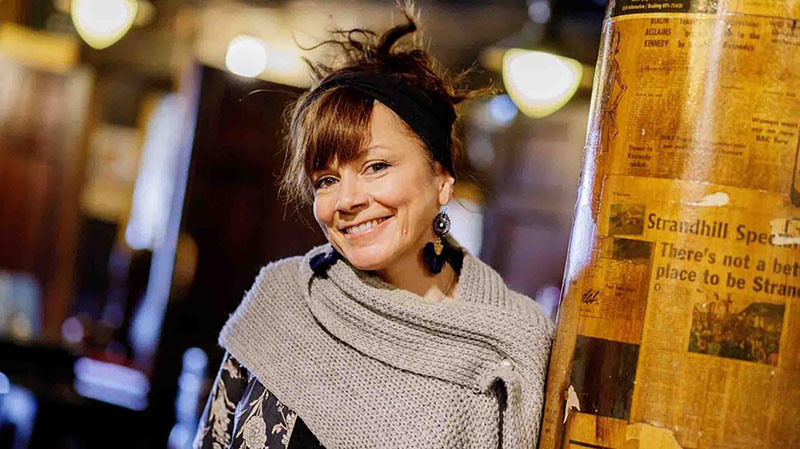 In the sixth of the series of LEGEND SESSIONS Ballyshannon Folk Festival is delighted to again host a virtual session exploring the possibilities where two musical genres coincide. This year the center point will again be the legendary Donegal Fiddler John Doherty whose roots run deep in the Bluestack Mountains of his native county but who travelled and transcended musical boundaries throughout his life until his last years spent in the Rock Hospital in Ballyshannon. This year’s legend session focusses on what might have unfolded if Johnny Doherty happened to meet up with the legendary folk singer Sandy Denny as both sat into an impromptu musical gig in one of the many pubs in Ballyshannon during the Ballyshannon Folk and Traditional Music Festival.

John Doherty was an explorer of his own country and its music. He travelled and played all over the North West, playing his fiddle music and was an integral part of the rich culture of the area. His compositions and style of playing are very much to the fore wherever Irish traditional music is played. Alexandra Elene MacLean (Sandy) Denny (6 January 1947 – 21 April 1978) was an English singer-songwriter who was lead singer of the British folk rock band Fairport Convention. She has been described as “the pre-eminent British folk rock singer”.

They never met during their lifetime on earth, but who knows whether they have met in musical heaven and have joined in the mega session in the sky. This imagined session will be facilitated by modern day legends, Seamie O’Dowd and Cathy Jordan and will take place on Saturday 30th July at 12.30pm in the Bridgend Bar, Ballyshannon.

John Doherty was born into a very musical travelling family in February 1900 in the Ardara area of Co Donegal.

John’s parents were Mickey Mór Doherty (Mór being an Irish word meaning big ) and Mary McConnell. Mickey Mór Doherty had a musical inheritance of a couple of generations of both Doherty and Sweeney musicians on his father’s side. Also, Mary McConnell was a sister of Alec and Mickey McConnell who were very well known travelling tinsmiths and fiddle players in their day. They travelled widely around the south west of Donegal where their tinsmith and fiddle playing skills were very highly respected. A great many of the tin fiddles in the area were made by the McConnells and the Dohertys.

John was the youngest of 9 children. The Dohertys’ lifestyle was that of a travelling family moving from place to place doing tinsmiths work, playing music and camping or accepting local hospitality wherever they could, then moving on. When the children were young the family would travel as a group with a donkey and cart to carry their needs with them.

When John got older he travelled on his own carrying his belongings and his tinsmith tools with him. As seems unusual to us nowadays, this great fiddle player’s belongings did not include a fiddle as almost every house in these parts had one.

Thankfully there are quite a few recordings of John’s music, stories and songs as well since many music and folklore collectors sought him out. There have also been a number of commercial releases of John Doherty’s music, some of which are still available on CD.

Apart from the huge repertoire of tunes that John got from his own family, he was very interested in the music of James Scott Skinner, the great Scots virtuoso fiddle player and composer whose music has been and is very popular in Donegal. The introduction of the gramophone and 78 records brought a lot of music from outside the existing local repertoire into Donegal. Indeed, due to the influence of the gramophone, John’s repertoire also included some classical pieces by Fritz Kriesler.

John didn’t read music and did not have a collection of recorded music that he could draw on like modern musicians. However he was blessed with and developed an incredible memory for tunes and a fantastic ability to learn tunes by ear.

John travelled to other parts of Ireland to attend Fleadhs and to Dublin where he competed in and won the Oireachtas fiddle competition. Mostly though, he travelled in Donegal, walking the roads of his regular beat. John maintained this travelling lifestyle until age demanded that he give it up. Many people loved to be able to offer John the hospitality of their homes throughout his life.

He had developed a highly personal style of playing, which although very much Donegal in essence was also his. John’s brother Mickey was said to have a style of playing which was much more like that of their father’s. Thankfully there is also a fair amount of Mickey’s music and lore recorded. There are a couple of duets recorded of John playing duets with his brother Simon as well.

John Doherty died at the Rock Home in Ballyshannon, Co Donegal in early 1980. May his soul rest in peace.

After briefly working with the Strawbs, Denny joined Fairport Convention in 1968, remaining with them until 1969. She formed the short-lived band Fotheringay in 1970, before focusing on a solo career. Between 1971 and 1977, Denny released four solo albums: The North Star Grassman and the Ravens, Sandy, Like an Old Fashioned Waltz and Rendezvous. She also duetted with Robert Plant on “The Battle of Evermore” for Led Zeppelin‘s album Led Zeppelin IV in 1971. Denny died in 1978 at the age of 31 due to injuries and health issues related to alcohol abuse.

Music publications Uncut and Mojo have described Denny as Britain’s finest female singer-songwriter. Her composition “Who Knows Where the Time Goes?” has been recorded by Judy Collins, Eva Cassidy, Nina Simone, 10,000 Maniacs and Cat Power. Her recorded work has been the subject of numerous reissues, along with a wealth of previously unreleased material which has appeared over the more than 40 years since her death, including a 19-CD box set released in November 2010.

Since her death, many tributes have been made to Denny, both in music and elsewhere. Dave Pegg of Fairport Convention recorded the tribute “Song for Sandy” on his 1983 solo album The Cocktail Cowboy Goes It Alone. Dave Cousins of the Strawbs wrote “Ringing Down the Years” in memory of Denny shortly after her death. Songs more specific to the death were Bert Jansch‘s “Where Did My Life Go” (from the album Thirteen Down) and Richard Thompson’s “Did She Jump or Was She Pushed?” (from the album Shoot Out the Lights) Fellow Brit folk pioneers Spriguns changed the title of their 1978 album to Magic Lady after hearing of Denny’s death while recording. In 1998, a variety of Daylily was named after her.

Denny’s songs have been covered by numerous artists in the years since her death. Some of the notable acts to have covered her music include Yo La Tengo, former Marillion frontman Fish, who covered “Solo” on his album Songs from the Mirror, Cat Power, Judy Collins, Nanci Griffith and Nina Simone. Kate Bush mentioned Denny in the lyric of “Blow Away (For Bill)”, as one of the musicians to greet Bill in Heaven. “Blow Away (For Bill)” is the third track on Bush’s 1980 album Never for Ever. In 1984, Clann Eadair released the single “A tribute to Sandy Denny”, featuring Phil Lynott on vocals.

Several radio specials have been produced about Denny’s life and music, including BBC Radio 2‘s The Sandy Denny Story: Who Knows Where the Time Goes. In 2007 “Who Knows Where the Time Goes?” also received BBC Radio 2’s 2007 Folk Award for “Favourite Folk Track of All Time”. In 2010, she was recognized by NPR in their 50 Great Voices special series.

In April 2008, a tribute concert was held at The Troubadour in London, to mark the thirtieth anniversary of Denny’s death. Those taking part included Martin Carthy, Linda Thompson and Joe Boyd.

A more extensive tribute was given later that year in December at the Southbank in the Queen Elizabeth Hall called The Lady: A Tribute to Sandy Denny with a band composed of members of Bellowhead, the evening featured a mix of young folk acts like Jim Moray and Lisa Knapp alongside those that had known and worked with Denny such as Dave Swarbrick and Jerry Donahue. These acts were joined by performers from outside the world of folk like PP Arnold and Marc Almond. The concert, which primarily featured songs written by Denny, received a four-star review in The Guardian. In May 2012 the Southbank concert was expanded into an eight date UK tour called The Lady: A Homage to Sandy Denny. The tour showcased Sandy’s entire songbook taking in her work with Fairport Convention, Fotheringay, her solo career and the new songs completed by Thea Gilmore on her album Don’t Stop Singing.

The band was, once again, composed of members of Bellowhead. Other acts performing included the aforementioned Thea Gilmore and up-and-coming folk acts Lavinia Blackwall of Trembling Bells, Blair Dunlop and Sam Carter, alongside more established folk stars Maddy Prior, Dave Swarbrick and Jerry Donahue. The line-up was completed with performers not normally associated with the folk scene; Green Gartside, Joan Wasser (also known as Joan As Police Woman), and PP Arnold. The tour was well received, obtaining a four-star review in The Times. The London concert at the Barbican was filmed for BBC4, and broadcast in a 90-minute programme titled The Songs of Sandy Denny in November 2012.

In the 2012 Irish film Silence (Harvest Films & South Wind Blows), “Who Knows Where the Time Goes” is used during the film and final credits.

In April 2016 Denny was inducted into the BBC Radio 2 Folk Awards Hall of Fame.

Denny’s collaborations with other artists, including with Alex Campbell, The Strawbs, Fairport Convention, Fotheringay, and The Bunch, together with numerous posthumous releases and compilation albums, are detailed further on the Sandy Denny discography page.