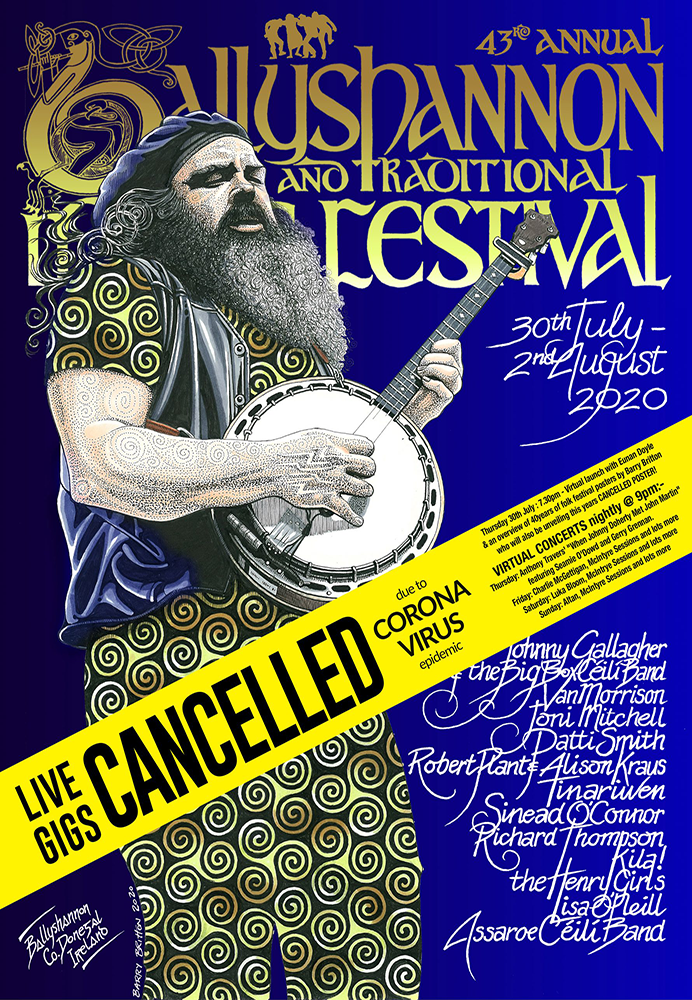 For the past 43 years on the last weekend of July, the historic town of Ballyshannon in County Donegal has stood firm in the face of many, many obstacles – everything from unseasonal horrendous weather to economic recessions – and held a traditional and folk music festival.

2020 has thrown a new curve ball – Covid-19 – but the local committee have come up with a four day virtual festival that kicks off on Thursday evening and ensures that the festival’s unbroken run since 1978 continues, albeit in a new format.

The 43rd Ballyshannon Folk and Traditional Music Festival will take place this weekend – 30th July to 2nd August as a virtual re-imagined festival. Earlier this year because of Covid-19, the festival had to make the difficult but correct decision to postpone this year’s live events in the interests of public health and safety.

However, over the last few weeks the festival has reached out to many of their regular artists and is delighted to say they will be bringing you four, one hour programmes this weekend.  The music never dies – so this weekend enjoy the very best of music in the company of some fantastic musicians and no matter where you are in the world we will be connected while staying apart.

In the fourth of the series of LEGEND SESSIONS a virtual reality tribute session to two musical greats who, although no longer with us in this life continue to have a major influence on our musical heritage, will be hosted. They are Donegal fiddler, Johnny Doherty who died in the Rock Hospital in Ballyshannon in 1980 and the eclectic John Martyn, who went to the great festival in the sky in 2009.

John Doherty was an explorer of his own country and its music. He travelled and played all over the North West playing music and he was an integral part of the rich culture of the area. His compositions and style of playing are very much to the fore wherever Irish traditional music is played

John Martyn was also an experimenter who pushed the boundaries of his world, his talent and his music. His creativity probed many musical boundaries and styles, sometimes at the expense of commercial success, but his legacy is priceless.

Though their backgrounds and genres are in sharp contrast their music crosses boundaries and allows us to imagine how they would have synthesised had they actually met. This virtual reality session attempts to create the session that might have taken place if they had travelled through time and space to Ballyshannon and logged into one of the many virtual sessions that are taking place due to the ongoing lockdown.

This distanced musical conversation between these legends will be facilitated by modern day legends Seamie O’Dowd, a renowned traditional, rock and blues performer and Sligo-based singer/songwriter Gerry Grennan and although it respects Social Distancing, it is guaranteed to take the “IST” out of distancing and have you Social Dancing!

There will be three festival concerts to enjoy over the weekend; each one will host a variety of specially filmed videos from well known artists including Luka Bloom, Altan, Charlie McGettigan, Johnny Gallagher, Billow Wood, Backwest, Dave Munnelly and many others.

The ‘McIntyre Lockdown Sessions’ will also feature in all three concerts, with local musicians James McNamee, Seanan Brennan, Brian Sweeney, Meitheal and Seannach.  There will also be an exploration of some of the Songs of the Erne and a tribute to the late Ben Lennon will be featured.

This year, as part of their re-imagined Ballyshannon Folk & Traditional Music Festival, the committee are delighted to present an exhibition of 40 Years of Posters by their resident artist, Barry Britton. This exhibition will be launched virtually on Thursday 30th July at 7.30pm in the Abbey Arts Centre and will be on exhibition live in the centre until the end of August 2020. Numbers who can view the exhibition live will be in accordance with all Covid-19 health regulations.  This is the first time that all of the festival’s iconic world famous posters will be on display and Ballyshannon Folk and Traditional Music Festival acknowledge the assistance of Donegal County Council in supporting this exhibition.

Thanks as always must go to our sponsors the ESB and to Donegal County Council for all their help and support with realising our virtual dream and insuring that the show must go on!  The people behind Ballyshannon Folk & Traditional Music Festival hope, wherever you are this weekend that you can join them, through their facebook page, https://www.facebook.com/ballyshannonfolkfestival , in appreciating some great music, song and laughter as they celebrate their 43rd Ballyshannon Folk and Traditional Music Festival – the oldest festival of its genre in the world –  coming to you virtually from the oldest town in Ireland.