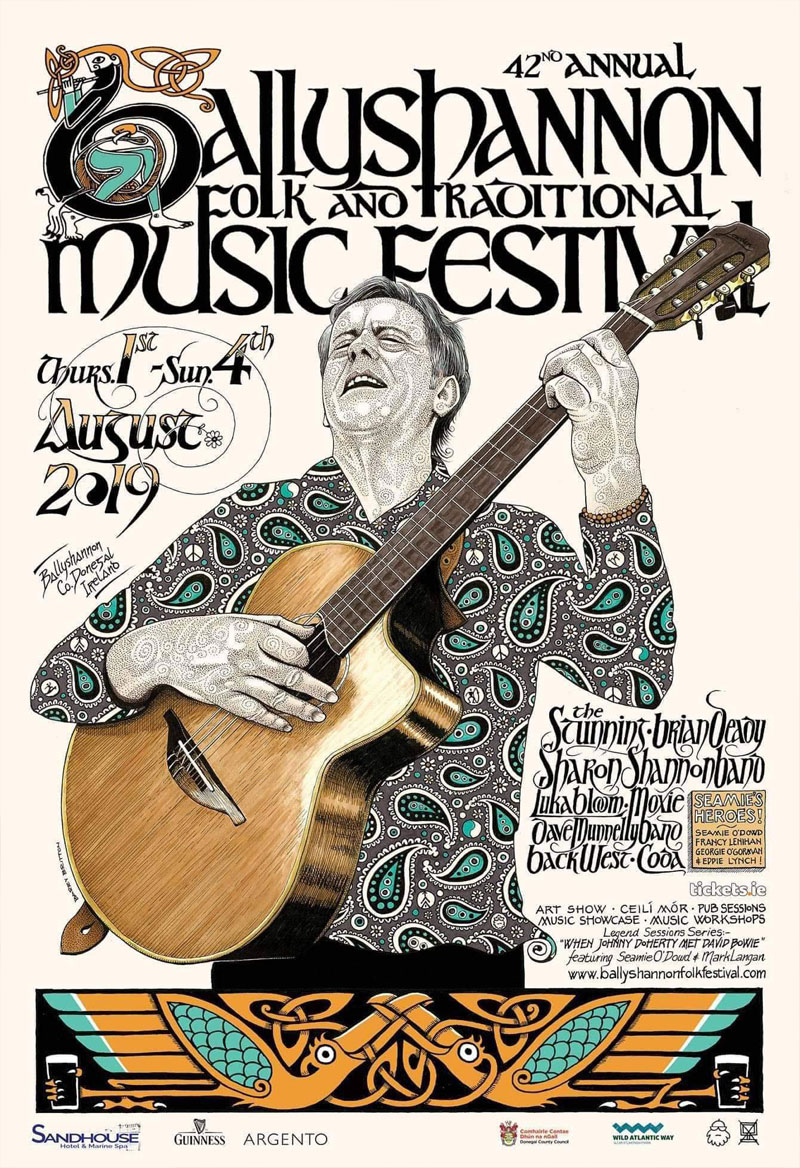 This year as part of our re-imagined Ballyshannon Folk & Traditional Music Festival, we are delighted to present an exhibition of 40 Years of Posters by our resident artist, Barry Britton – this exhibition will be launched virtually on Thursday 30th July at 7.30pm in the Abbey Arts Centre and will be on exhibition until the end of August 2020.  This is the first time that all of our iconic world famous posters will be on display and we acknowledge the support of Donegal County Council in supporting this exhibition.

Born & bred in Co. Donegal, self taught artist Barry Britton has spent most of his life in his native Rossnowlagh, close to the magnificent golden strand listening to the chorus of the wild Atlantic waves. A few years were spent in exile in Dublin in the 1970s where a promising career in architecture beckoned. However, by  1978 he had made good his escape from the big city & put in the foundations for his home on his father’s farm overlooking Durnesh Lake in Rossnowlagh. He’s still there today, so he is!

Surfing had arrived in Rossnowlagh in the mid 1960s courtesy of Barry’s mother who acquired a couple of surfboards for the use of guests of her hotel, the Sand House, overlooking the beach. But she also had five young sons who, when they spotted the potential for fun in the sea, commandeered the surfboards for their own amusement! By 1968 Barry’s father, the Boss, had spotted the potential of this new sport too. He named the hotel pub the Surfers Bar & instigated the first Intercounties Surfing Contest which still runs today as an annual end of season party event in Rossnowlagh during the month of October. One of the brothers, Conor, started designing posters for the event in the early days. Around 1973, with Conor away on placement for his hotel management studies, it fell to younger brother Barry to produce a surf poster for that year……& so he has been doing them ever since! Many of them are on show at the Local Hands Arts & Crafts studio in Ballyshannon year round & can be acquired through www.localhands.ie . Over the years Barry’s surf posters have become collectors’ items & at the turn of the millennium he was commissioned to design posters for some Hawaiian events, the most prestigious surf contests in the world. The artist himself may be found during the summer months at Britton & Daughters studio gallery on the seafront in Rossnowlagh  Tues.–Sat. (afternoons – but if the surf is up he will be ‘GONE SURFING’ all day !) .

The artist was first approached about ‘doin an oul poster’ for the fledgling Ballyshannon Folk Festival by Anthony Travers in early 1980. This encounter took place in Sean Og’s Pub where copious amounts of persuasive porter were slid across the wooden bar counter to ensure agreement could be reached! And so, many decades later, we find Barry still dreaming up new ways to depict folk & trad musicians on these much sought after posters which have become collectors items. Indeed, the Ballyshannon Folk Festival poster has reached such iconic status among musicians themselves that they consider it a great honour to be depicted on it. For more information on the festival log on to www,ballyshannonfolkfestival.com . From the outset Barry has provided his artistic skills free of charge to Ballyshannon Folk & Traditional Music Festival which is still held on the August Bank Holiday every year. Many of the posters are on show & for sale at the Local Hands craft studio on Main St. , Ballyshannon. They may also be seen on www.localhands.ie through which you can contact the artist should you wish to acquire one.  In 2019 Barry Britton completed his 40th poster for the Ballyshannon Folk Festival.

Barry holds an annual exhibition of original works at the Abbey Arts Centre at the top of the town in Ballyshannon from the Thursday to the Sunday during the Folk Festival . The art show Thursday opening night has become a popular event in its own right with a celebrity on hand to open the show along with guest musicians, vino & craic. It is also a great opportunity to pick up a Barry Britton tinted pen & ink original (he only manages to do about 12) before that years crop are dispersed throughout the four corners of the globe. Celtic art, interesting buildings & landscapes/seascapes, musicians, characters  & surf scenes are all dipped into for the subject matter depending on the mood. Celtic motifs, spiritual fantasy & hidden ‘pictures within pictures’ which require close examination have increasingly become part of Barry’s art.

The artist does an exclusive range of limited edition black & white prints which can also be viewed & acquired at Local Hands studio shop or through www.localhands.ie. .  Prints may be hand tinted by the artist to order . Commissions for all kinds of pen & ink artwork, such as portraits or particular scenes (or both combined !) , are gladly undertaken at any time.